Shopping Cart
Your Cart is Empty
Quantity:
Subtotal
Taxes
Shipping
Total
There was an error with PayPalClick here to try again

Thank you for your business!You should be receiving an order confirmation from Paypal shortly.Exit Shopping Cart

With a grateful thank you to the dedicated owners,

who took the time, and had considerable expense in

There have been others also deserving of this accolade,

but the Grand Champion title is only a reasonably recent innovation,

and not all owners have the time to devote to this achievement.

and the first show dog for his novice handler/owner Carol Smith.

Living in Darwin, Carol had to contend with the "tyranny of distance",

but Sox had a magnificent record of multiple Allbreed BIS/RUBIS and Group wins.

for the Contest of Champions for the top Show Dog in Australia.

Sox was renowned for his extremely sound movement,

and although only 16.5" tall, he could hold his own against all the top competition.

Biddy was known for her very easy gait,

managing the family that she lives with.

accidentally killed by a car.

Morgiane was one of Heather house dogs when she lived in Tasmania.

When she was posted to her next job in the Hunter Valley,

her friend Heather (a Samoyed breeder) asked if she could keep Morgiane.

As Heather knew how much "Samoyed Heather" loved Morgiane, she agreed.

Morgiane has been campaigned (with the Samoyeds)

and is Heather's first Basenji showdog,

Morgiane is renowned for the fact that she hated other Basenjis,

but loved the white "fluff balls".

Ferret is placid, laid back, and sees no reason to stir himself up

when others around him are sparking up.

Why not just accept everyone?

He is a pleasure to have around!! 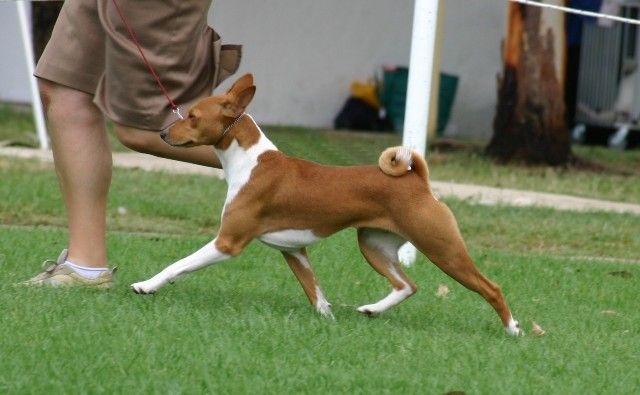 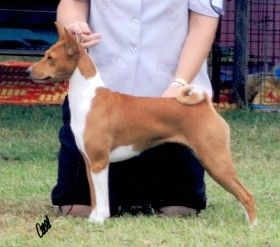 Lara was a trial for Heather throughout her show career.

Very determined to go her own way,

and do things as, and when she wanted to.

Often her time line and Heather's did not coincide!!!

Once finished her show career, Lara retired back to me,

where she tried to upstage her mother Mary

Sire : Kenset Born on the Fourth of July

Although Andie is not a Tamsala Grand Ch, he deserves a place in the list,

as he had several first's to his name -

the first American import Basenji with an Endurance Title,

and he really set brindles "on the map" in the showring in Australia.

Andie has now returned to the USA,

where he is now a Dual American Champion.

This makes Maggie the first Grand Champion for Puff,

and the third for Mary.

After winning his Grand Championship, Merlin became one of the first Basenji Neutered Champions.

He is retired happily in a family home with Zena - a Turnip X Rinky daughter.